By the early 70's, the folk revival had turned into a way of life for the many thousands of followers in the country, and it seemed that in Coventry a thriving folk club could be found in every other street corner pub.

We may have moaned about the cost of living then, but the fact was that many brilliant artists would come and do guest spots for a fee that didn't break the pockets of club organisers, who in turn were able to charge admissions that didn't break the pockets of audiences. And audiences were large. Ex-devotees of the mid 60's cultural revolution, fans of Dylan and Paxton, new enthusiasts of the renovated traditional cultures, contemporary music lovers hanging on every word of the many singer songwriters who were around, poets and philosophers a like, could now choose and visit many clubs to suit all tastes.The number of 'Singers' clubs and sessions, though high, were by today's standards overshadowed by the thousands of clubs in Britain, that could provide a name act almost every week, complete with host, floor singers and raffle in the interval.

It will be impossible to cover the early 70's in one article with any depth, so many omissions now should should hopefully be dealt with in issue 7. I started getting involved in the Coventry folk scene myself, late in 1973, so I'll be able to rely a little on my own precarious memory. However i am indebted  yet again to Dave Coburn for his invaluable help. (Dave was at this time more involved than ever in the running of key clubs in the city.), and also to somebody who, to my knowledge, contributed more than anyone towards the local folk scene and the bringing together of of artists at the excellent venues he organised -

John, for those who are wondering, is alive and well and still occasionally pops his head round the door at the Pitts folk club. A brief run-down of his folk career will give an idea of the variety of clubs that existed in and around the city, for John organised or helped to organise, no less than seven folk clubs. Before any of those, however, he first got involved by becoming a regular singer at
Napton Folk Club
and he is featured on the limited edition (100 copies) LP Napton Folk, http://rateyourmusic.com/release/album/various_artists_f2/napton_folk_club/ on which he played the classic version of 900 Miles. Also on the record were Dave Bennett, to whom the sleeve notes attributes what must be 27 fingers, playing the Men of Harlech, Sean Cannon, singing Lark in the Clear Air, and Dainty Davy, Margaret Harvey, Dave Norton, and club host Tony Johnson (nick-named 'The Mouth') because of his ability to stun a rowdy audience with soundwaves when requesting them to keep quiet! The cover in fact features a cartoon of the same mouth with the entire club ensconced within!
http://www.popsike.com/NAPTON-FOLK-CLUB-VA-1971-EDEN-LP-PRIVATE-PRESSING-100-COPIES-ONLY/200715957831.html
SIDE ONE 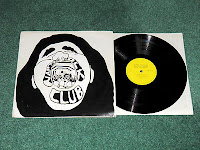 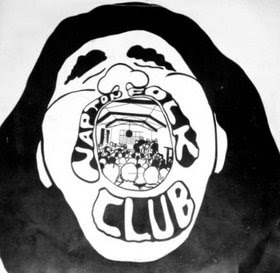 John, who styled himself after Malcolm Price and Doc Watson, became a popular figure in the local folk scene with his versions of Alberta, Goodnight Irene, It's Childing Cooking Time in Childing Country and many other unforgettable songs (except that in John's case when he occasionally fluffed the lyrics, and who could blame him). The first club he ran was at The Golden Cup in far Gosford street, which he started in the late sixties, although he was also involved in re-establishing it more recently (1979). From there he moved on to the Boatyard (Hand in Heart), almost across the road, where, like the Golden Cup, the evenings were usually local singers nights with occasional guests booked. Dave Coburn took over the running of this club in 1972 but in the meantime John had moved further afield to start a Thursday night club at the Newlands Hotel, Tile Hill Lane, "featured weekly a local singer or group in the guest spot", thus enabling us to hear an overall performance rather than the usual couple of songs" (Coventry Evening Telegraph). 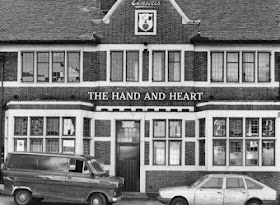 By 1973, John, with neighbour Dave Bennett, had got another club going for a few months at the Rose and Woodbine in North Street, a venue to be used later by Dave Cooper. The following year, John first introduced folk to the local biking community by helping to start a club at the Antelope Motor Cycle Club near the Butts. 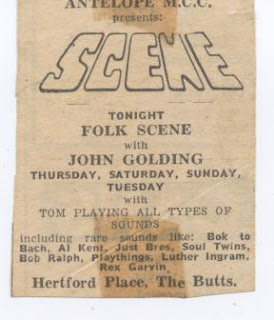 A feature on this club by the Evening Telegraph reporter, John Lake, ran "The Antelope Club, Coventry, exists primarily for motor bike enthusiasts. But members are rapidly becoming hooked on a secondary interest - folk music. "Their Wednesday folk nights were inaugurated several months ago by Dave Higgins and Alan Burnham...with the help of another member - John Drittler, a leading local figure in local folk circles, the weekly session has become a permanent fixture. John has proved invaluable both as co-compare with Dave Higgins and as a resident singer....

Sean Cannon, Dave Bennett, Malcolm Neal, Mick Stuart, Pete Rigg and Rod Felton are all regular performers and very often the organisers are faced with too many floor singers and too little time - a very healthy sign."

The article refers to guests booked at the club, including Diz Dizley, The Ian Campbell Folk Group, Barry Skinner, Andy and Janet and One Day Thomas. The club also featured the first local performance of 'Up and coming singer- guitarist" Chris Newman, now working with Fred Wedlock.

In around 1974, John became one of the many hosts involved at the Grange, a club now sadly missed by many people, and probably at its peak of popularity at the tiem that John was running it. I shall go into the history of this club in greater detail next issue, for reasons that should be hopefully clear by then. 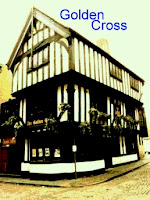 Simutaneously with the Grange, John started his seventh venue at the Golden Cross in the City centre, a club where I appeared on one occasion along with Folks cartoonist Den Clarke, in the days when we performed our 'piss take' routine and narrowly avoided a good lynching from the artists that featured in that set! Despite that, the club was highly successful and popular with many students from the Lanchester Polytechnic who, on more than one occasion, booked John to do a guest spot there. The Cross folk club was taken over eventually by the Other Rob Armstrong.

For a quick run down of what else was happening in the Coventry folk scene, the following list of clubs may bring back some interesting recollections from readers; 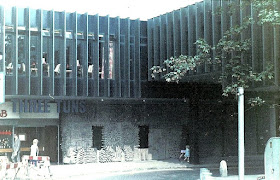 The Three Tons Folk Club - started in 1970 and was organised by Dave Coburn, Paul Burdon and Rod Felton, with assistance from Lol Pavey. This venue lasted two years and then Dave took over the running from John at the Boatyard., which featured local singers on Tuesday or Thursday nights and lasted another two years.

At the same pub on Fridays, but called the Owl Folk, was the club hosted by Clem McHale. This club tried to feature as many areas of folk music as possible and booked occasional guests.

Monday, still a popular night at the Village Pump, a long running club mentioned in the first part of this series, which featured dancing and was hosted by Magic Rantabout.

The Denbigh Arms folk club in Monks Kirby met on Saturday nights, hosted at first by the Gaels and later Dave Sampson, who then moved nearer to town when he started the Fletch folk club of Fletchamstead Highway. At the same time, Dave ran a Birmingham club at Roebuck in Erdington. In 1974 Dave had also started a club at the Pilot in Radford, where appeared, among others, Joe Brown of the Bruvvers fame. These were Dave's four main ventures, all of which were very successful and well attended clubs.

As well as the Owl Folk Club and Napton, Friday was the night for the Kenilworth Folk club at the Virgin and Castle, predecessor to the present Sunday night club at the Burnt Post, hosted by John Macintosh, bassist for the resident band, Sneak's Noise. The Coventry folk Club met fortnightly on Fridays at the New Inn, long Lawford, and the residents were Silver Myter. in 1976 the Magic Lamp also opened on a Friday night at the Hope and Anchor, White Friars street, hosted by Bob Powell and Pete Willow, with the assistance on Nick Hill.

Another long running club was the Rocky Road folk club which met at the Bear Inn, High Street on Sundays and featured mainly Irish and Scots music. The resident singer, Billy Davoren.

The Bedworth Folk Club used to meet on Tuesday nights at the Woolpack Inn, hosted by Pete and Malc. The club now meets at the corner house, Bulkington on Thursdays.

Another busy night was Wednesdays when you could visit one of many clubs including Folk Centre at the The Globe Hotel, Warwick, which had various residents, Bluegrass, held at that well known folk venue - the Bull's Head, Brinklow, hosted then by the Down Country Boys, Cedars Folk at the Cedars Hotel in Coundon, hosted by Pat Cooksey and Tom Collins and the Henley College Club hosted by Folklore, then at the New Inn, Longford although they have since moved to the new Phoenix in Broad Lane. Two more clubs that opened on Wednesdays in 1975 were the Grapes hosted by, among others, Julie Duckworth and Nellos, a popular venue for a club that stayed open until the wee small hours, organised by Dave Higgins, and featuring some superb guests.

By the mid 70's clubs had opened also at the Climax, the Forty Thieves, Hertford Arms, Gosford Park Hotel, Navigation Inn, the Cheylesmore and a whole host of other places.

Many of these clubs were able to book guests and still survive, at least for a while. Apart from the many local acts who received bookings and return bookings, such as the Grunt Band, Mick Stuart, Sean Cannon, Pete and Sheila Rigg, all of whom are featured just as much in local clubs today, were often treated to appearances of Diz Dizney, Derek Brimstone, Ian Campbell, Gerry Lockran, Cliff Augier and the like, who sadly do not play in the area so frequently, as there are decidedly less clubs which could afford top run regular folk nights of that nature.

So to conclude, here is an appeal. If there is anybody who would like to risk his resources to open, say, a Friday or Saturday night club in the Centre of Coventry, booking such guests to appear, and if there is any pub landlord who would offer the venue, without charging the organiser for the privilege, there would be a lot of people, I'm sure, who would make a point of supporting that club, thus bringing back the spirit of folk that existed in the late 60's and early 70's.

Next issue, i hope to go into more detail of some of the clubs mentioned above. Any helpful information is most welcomed.