(I have no photos or audio of Pete and Sheila Rigg) 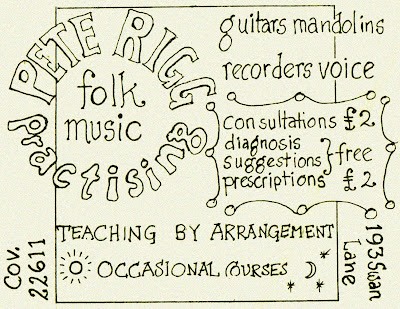 Sheila Rigg's dark secret is that she has been playing guitar for longer than  Pete. Having always been interested in singing, she borrowed a guitar about fifteen years ago, withdrew into her room for a month or so, and emerged with sore fingers and an ability to play the instrument. Pete is also self-taught and feels that as performing folk music is mainly a matter of yur own style, this is the best way to learn, even though he was influenced by the many fine musicians around him at the time, including Mark Newman (Chris Newman's brother) and, a little later Steve Tilston.

When Pete lived in Leicester, before going to University, he first performed music with Bob Calver. Their original aim was to form a rock band, which is why Pete's earliest musical influences were Bob Dylan and the Who. They even attempted to build their own guitars and suceeded in producing a workable electric bass. Eventually they decided to play acoustic music and to learn a few folk songs. Throughout the summer holiday they sat down and learned about twenty standard folk songs from books and soon had a workable range of material to draw from, with such numbers as Wild Rover, Kigary Mountain, mixed with early Dylan and Beatles songs.

One of Sheila's earliest influences at the time was Joan Baez, and when she was roped into join Pete and Bob and form a trio, they found a great wealth of material between them. They were encouraged as a trio by a friend who organised a youth club and happened to be a great folk music fanatic. He organised regular folk concerts at the club and asked them to apear as residents. With so many songs under their belt, they found that they didn't have the usual problems that this entails, having quickly to learn new numbers every week to keep the act varied.

They worked under the interesting name of CAERLIER, the Celtic name for Leicester, meaning literally the City of King Lear. For a year the trio worked hard and derived much enjoyment from their music finding that Sheila's voice blended well with the guitar accompaniment that Pete and Bob had learned together. The moment of great decisions finally arrived when they had to decide whether to go to University or to continue with their music. They decided on University. 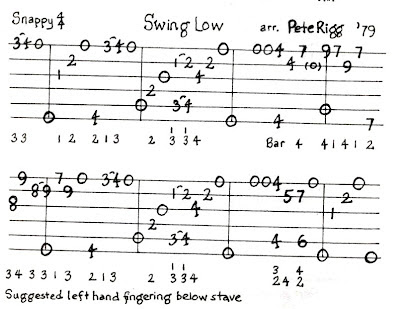 Bob eventually followed a career in advertising and after much travelling around, Pete and Sheila settled in Coventry, working musically as a duo as well as making the occasional solo appearences at a folk club. A couple of years ago, they worked briefly with Dave Herbert (of Incredibly Average fame and composer of Pogle's Wood) and appeared under the name of Paracelsus. For these few weeks, Pete and Sheila  feel they learned much from Dave about how to present their material to a club audience, but sadly the venture was short lived as Dave lived 25 miles away and had many other committments on his plate.

These days, you are most likely to see Pete and Sheila performing guest spots at the Three Crowns in Barwell, the Bulls Head in Brinklow and the Pitts Head. They do not go out looking for work and make on average half a dozen guest appearences a year. It's possible that had Caerlier stayed together, they could have been fully professional folk musicians by now, but neither Pete or Sheila feel that this is what they wanted out of life. As Sheila explains "The thing about looking for work, we found that neither of us are too good at hustling. Secondly it is difficult to bring down into a very short space of time what we do. One of the things we do is variety - all sorts of things with different types of instruments, different types of music. You can't do that in three songs. We seem to work better where people know us and that's a long process."

The variety of music that they play in considerable, and although there are always classic Pete and Sheila numbers that will always get requested when they appear, such as Sheila's beautiful rendition of Joni Mitchell's For Free, or Pete's skilful handling of Steve Tilston's Normandy Days, each guest spot that they give has its own uniqueness, with the choice of material depending much on how they feel at the time.

As with their songs, the number of musical instruments that they have collected is vast; some are totlaly unique and were built by Rob Armstrong. Apart from their six string acoustic guitars (Pete's Armstrong and Sheila's Yamaha I80) they have an armstrong seven string, ten string (Quindola) and Mandolin, a double bass, Appalachian Dulicmer, bowed Psaltery, assorted recorders, tablas, zither, harmonium and piano. (The latter, understandably is not taken to gigs). The keyboards are played by Sheila and the seven-string guitar is exclusively Pete's.

Sheil's interest in musical instrument other than guitar goes back to the days of Caerlier. She explains; "I found that what I was playing did not neccessarily match with what Pete and Bob were doing on guitar. Because there wer two of them (and they were bigger than me!) there was the implication that what I was doing was wrong, so I stopped playing guitar for quite a while. Then after a time I started playing again, not drastically successfully, and then got to the stage of saying, "Ok I shall never be a guitarist. Blow it, I shall be a multi-instrumentalist" and started playing around with other instruments."

Her first departure from guitar was learning to paly double bass. At the time, there were two female bass players working in Leicester and Sheila decided there was no reason why she shouldn't be the third. She managed to borrow a double bass shortly before the trio wer booked to appear at a club organised by Toni Savage in Leicester. After what could have only been five hours practice, they thought it would be nice for Sheila to play bass at this booking. So she did.As she recalls, the evening was fun and the only adverse comment was "You can't really hear bum notes on a bass, anyway" That came from the person who lent her the bass in the first place.

The Quindola is also played mainly by Sheila and the creation of that was almost by accident. Pete and Sheila had considered using a mandolin and exploring possiblilities with four string tunings. pete had shown interst in an old Harmony four string that was for sale at the time but decided, haivng seen a small guitar body that Rob Armstrong had built, that it would be worthwhile asking him to create somethig along the line and lo and behold! Rob had produced a Quindola.

The history of Pete's seven string guitar is a little more complex. Pete had developed his guitar playing through studying various styles. He had missed out on the Blues Revival, although he had learned a few numbers note for note from Paul Oliver recordings, and by the time he's started studying at Warwick University, Ragtime was becoming popular, with the arrival of Stefan Grossman tablature books and records. During this time, Pete lived with Dave Bennett who contributed much to Pete's interest in Ragtime playing. It got to the stage when people were asking Pete for guitar lessons and so he started to give them. Pete recalls one pupil who had been to the other teachers and yet, despite his desire to learn guitar, had for some reason been totally unable to do so. Pete taught him note for note pieces he played he played himself, with some degree of success, but realised that after nine months the pupil ws still unable to play the music that he wanted to learn. For Pete it was a little unnerving to watch somebody play exclusively what he played himself, as well as Pete could play it, and through his pupil he saw himself playing guitar from the outside. Pete became critical of his own guitar playing and wanted to learn something different. It was about this time that he started to think about multiple guitar strings.

Originally he asked Rob Armstrong for an eight string guitar, which is what Rob built. Pete used the instrument to try out new ideas with lute music and spent about a year developing this new style. But, as with most protoptypes, the guitar had one or two design faults. Rob had used a 12 string guitar neck which proved to be too narrow for eight equally spaced strings. Also the length of the neck caused problems with the high tuning of the top strings. So Rob converted the guitar to a seven string which Pete uses more now to work with open tunings. For Pete, the instrument has yet to reach its full potential; "I haven't learnt what the instrument's about yet. I will do, but it's a long term project. It will be years before I've fully figured out what can be done on it.

As far as performing music in public is concerned, Pete and Sheila Rigg have perhaps aready achieved most of what they set out to do; playing a small and select number of gigs in front of audiences with whom they can readily communicate. Their aim to learn more of different individual musical styles with overall effect of becoming more free and spontaneous in the presentation of their music, which explains a little of their interest in instrumnets other than six string guitar and in musical theory generally.

Pete uses an analogy to explain how he sees different musical styles and how different musicians appraoch them, in terms of four alleyways that converge at a central point. One is the simple 'folk approach', where the music provides a basis for the telling of a story and can be adapted and developed to suit its purpose. One is an 'image' approach where music is presented to the listener as a fully arranged 'Fait accompli', as with pop music, one is the classical appraoch in which standard musical theory comes to the fore to create a fully arranged piece; and the other is the jazz or improvised approach, in which music is a form of free expression albeit within certain guidelines. A musician may start by travelling up one of these alleyways until he's achieved much of what he wants to at which point he meets up with the other three appraoches and may, if he wishes, learn more by travelling down any one of them. For Pete, the initial appraoch was through folk music and he would like to explore the other three.

With a wide variety of songs, tunes and instruments at their disposal, Pete and Sheila could if they wanted walk on stage and present a total kaleidoscope of musical styles in any one booking. Instead they generally bring about four instruments with them and use them to the full extent, or they may not use any instruments at all and give just as enjoyable a set by singing unaccompanied and using skilful harmonies. In this way, whenever they perform a booking, they are able to present an overall sound that is uniquely theirs as opposed to an upcompromising mixture of different styles that follow no pattern.
........................ 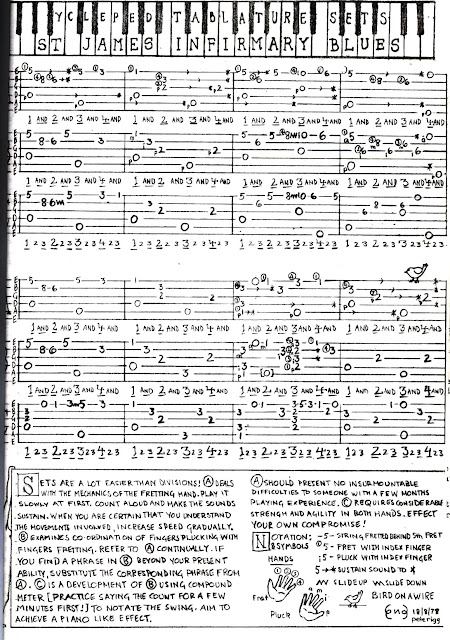 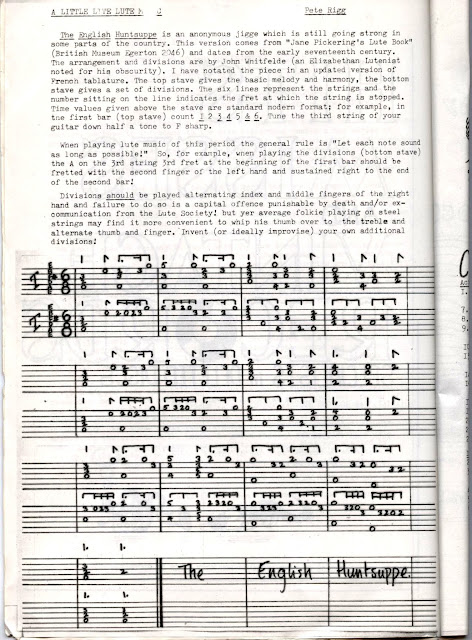