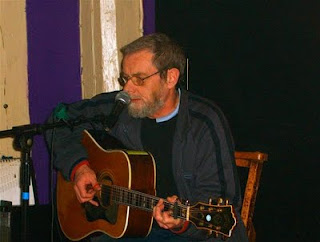 Dave Bennett was another Coventry Folk Scene legend who sadly passed away 28th March 2010. Dave was an energetic figure on the Coventry folk for about 40 years! Apart from his amazing talent for playing ragtime numbers at breakneck speed, Dave assisted with or ran his own folk clubs, encouraging new talent along the way, including Pauline Vickers (who later became better known as Pauline Black - lead singer with the Selecter.) and more recently Kristy Gallacher, whom he also gave guitar lessons too.

From his My Space biography -

"Dave started playing years ago when he was living in Aberystwyth and, influenced by Dylan, Tom Paxton,Joan Baez, et al, he concentrated entirely on fingerstyle guitar and became part of a folk group called the Pennyfarthing! While completing his PhD in Insect Physiology at the University College of Wales. In 1970 moved to Coventry and continued playing in folk clubs and music sessions. Was Sean Cannon's guitarist for a short while and even appeared on TV with him and made a cassette tape based on the TV programme. Met the Furey Brothers at "The Old Dyer's Arms" and developed his love of Irish music. Throughout the 70's and the 80's and 90's he played many solo/combo gigs throughout the UK and Europe. Many Solo/Duo/ Rock Band /Irish Showband/Country Band gigs and played until minutes before his demise!! Played with his partner Brenda, an unaccompanied traditional singer.
Influences 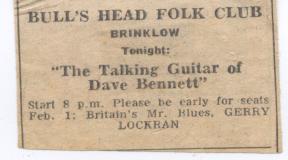 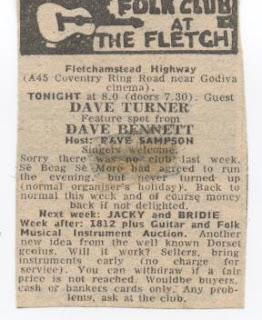 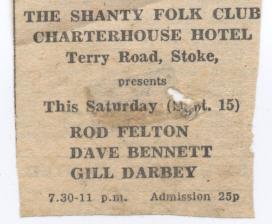 I met Dave at the Rude Bear Folk at the Three Tons in Coventry in 1972. The club, run by Rod Felton and Dave Coburn, soon moved to the Boatyard in Gosford St. and Dave was a regular. His accomplished Ragtime style influenced many a guitarist. It was a style hard to emulate easily but nonetheless caused many to work harder at their picking. Dave went on to establish his own club at the Old Dyers Arms and encouraged so many players including a young Pauline black who used to play under the name Pauline Vickers at the Old Dyers Arms. Pauline has acknowledged that Dave 'kickstarted' her entire career before  Selecter. I remember seeing her play there circa 1978, doing a Stones and Joan Armatrading song and going over to give her the thumbs up. I never imagined that that was the start of a disguised musical career that would span Two Tone, TV and Radio and much else. A year later I saw her again at the Lanch Poly with Selecter who were just starting off.- the rest is history!.


Dave was advertised in Hobo several times.  One ad he did for Hobo read "Blind Drunk Dave Bennett -  five fast fingers flashing up and down the fretboard" Dave was a highly popular artist on the Coventry folk scene. In 1971 he performed at a major folk concert as part Warwick university's arts festival.


More recently - Dave played with Rod Felton in a Grunt band style as Im and Im.

I was lucky to see Dave one last time in 2009 when I went back to Coventry. He was supporting his daughter Sarah Bennett, also an impressive guitar player at Janine's Acoustic Escape session. Dave invited me to another one of his folk club initiatives (somewhere near the Belgrade) but unfortunately I had to return home before that.

To the end he was an influential personality and player on the Coventry music scene, running clubs, playing and encouraging a whole new generation of acoustic players. Practically every one remembers him as a nice ,friendly and encouraging bloke and an amazing guitar player.


Dave's place in these annals of the Coventry music scene are more than well earned / deserved. Above there are some samples of his amazing playing.

Recorded by Marko Krnjulac in the late 70's at The Old Dyers Arms, Son End, Coventry. This live Ragtime Medley includes a fast version Anji and Men of Harlech.

"you are the man who kick started my entire career at the 'old dyers arms' in coventry....those were the days" Pauline Black - The Selecter


And here's Dave's daughter Sarah Bennett with some amazing guitar work of her own.

Interview with Sarah Bennett from It's All About Coventry.


And his son Stephen Bennett -