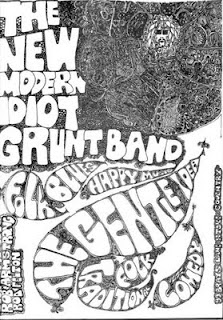 The New modern Idiot Grunt Band was formed Coventry in 1967 by Rod Felton and Rob Armstrong. Both of them are Coventry folk legends and further information will be on this site. By 1968 the new Modern Idiot Grunt band had turned professional. Their lighthearted and fun jug band style and zany humour ignited folks and over the next three years they performed at hundreds of clubs, pubs, colleges, universities and private functions all over the country. "Their seemingly spontaneous mayhem created an act unique in content and presentation." The did their last gig on April 30th 1971. Although they played on a number of radio and TV shows they never did any formal recording. However their act has been preserved in the form of a live album recorded at the Three Crowns, Barwell on the wobbly Duck label. twelve live tracks available for download at 55p each! Download's available for Dando Shaft's Raremusez basement site (along with tracks by Dando Shaft and Rob Armstrong). The grunt band also played in Germany as can be seen in the cutting below.
http://www.raremusez.co.uk/musez/index.php?option=com_maian15&view=album&album=3&Itemid=9 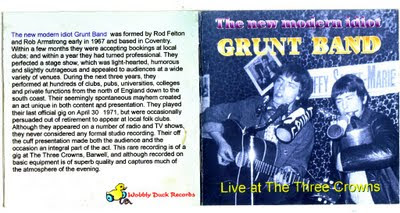 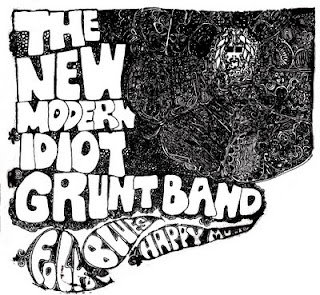 "I have just discovered a tape that I recorded when I ran a folk club at Ye Olde Red Lion, Rugby 24th February. It includes an entire performance by the 'New Modern Idiot Grunt Band' and although the sound is distorted in places (because Rod was banging his foot so hard that it made the tape recorder jump) it isn't that bad. The recording was made on 24th February 1969 with Rob and Rod's full co-operation and consent." Graham also says " between 1968 and 1970, I ran a folk club in Rugby on Monday nights at what was then called 'Ye Olde Red Lion', in Sheep Street. Rob and Rod were popular"

The play list (with a few jokes in between)is:

Gospel Blues (Traditional American)
Lady Baby Gypsy Queen (Felton)
Everybody Loves a Nut (Clement)
Can't You See That I'm Just Crazy Over You ?
Harry Rag (Davies)
Mrs Murphy's Man is Back in Town ?
Yat-tat-tat-ta-tat-tat Yat-tat-tat-ta-tat-tat ?
Graham Bradshaw commented on this site  http://mudcat.org/thread.cfm?threadid=96651
" Somewhere in my tape archive, I have several recordings of the Grunt Band - recorded at Burnt Post Folk Club, The Freemasons (worth a thread on its own?!) and the Come Together concert in 1983. Some of that was broadcast on Mercia FM at the time, so quality not too bad in parts. (Note to myself - must look them out sometime)" (So perhaps there may be more tracks forthcoming!"
NMIGB also did a gig in London with Alex Campbell and rod was sharing a flat in London at the time with Diz Disley.
Dave Bennett and Rod Felton formed a similar and temporary outfit in the noughties called Im and Im. dave described the duo as "a duo of meteoric rise to obscurity! But we had a lot of fun."
During their time they played the Rugby Rock Festival  in 69' with Free, Genesis, King Crimson, Pink Floyd, Edgar Broughton Band, Third Ear Band, several blues bands, ( Climax Chicago, John Dummers, Spirit of John Morgan), Strawbs (acoustic 3 piece), Bridget St John and many others.
Graham Oliver also recalls 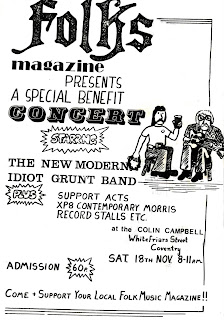 " I think I arranged that particular meeting - at the beginning of May 1969, Toni Savage (one of the nicest and most helpful folk music impresario/agents you could want to meet)was trying to arrange some bookings in the Coventry and Leicester areas for Alex - we agreed to book him for the Monday night - which I think may have been a Bank Holiday or at least a day that most people took as a holiday even if it wasn't official. I took the whole week off and followed Alex to all the other gigs which included the Town Arms in Leicester and the Mercers Arms in Coventry as well as Warwick and possibly Monks Kirby - all great fun - what a great man he was both on and off stage - but that's a completely different story.

To make something special out of the Monday night at Ye Olde Red Lion, I managed to get an extension to 11.30 (which was late in those days) and permission for the show to go on until midnight. In addition to Alex I also billed The New Modern Idiot Grunt Band, Ernie Hudson and Geoff Smedley. The Coventry Evening Telegraph and Rugby Advertiser did us proud with brilliant pre-show write-ups and john Phillpot used the headline 'A Folk Bonanza' - in truth it was more of a Comedy Bonanza.

My contemporary diary indicates that I paid out £35 to the performers and probably bought them drinks on top of that - admission was 7/6 (£0.375 in today's money) and the room was packed. Nevertheless, for an all acoustic show with no microphones or amps, it was brilliant and the audience were incredibly quiet exept when laughing or applauding. Alex C\mpbell had never seen Rob and Rod perform before and during the 'interval' he told me that he thought their act was 'amazing' - praise indeed from the great man.

During Alex's second half he made several references to the duo and the art of 'Grunting' he also mentioned them from the stage at the Town Arms when he told the audience that they should make a point of getting over to the Coventry area to see them. Toni Savage was with also us in Rugby on the Monday night and brought along a number of his new protegies as floor singers with the intention of show-casing them to the other club organisors that would have been with us. I think in this instance it worked the other way round because, thereafter, Toni became a great fan and promoter of Rob and Rod . . ." http://mudcat.org/thread.cfm?threadid=96651

Other venues they played were  HOLLY BUSH Folk Club (Nuneaton) and the Woolpack (Bedworth) and one in Bulkington. in Coventry - the Plough Club (Silk disco) in 1971 (Plough on London Road). 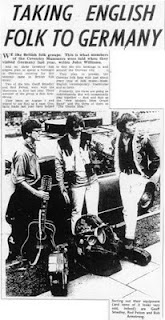 Trev Teasdel recalls " during the summer 1970, Pete Waterman introduced me to Rod Felton at Pete's tuesday progressive music night at the Walsgrave. I'm sure I saw i'd seen both Rod and the Grunt band play previously but not met either of them. Pete booked both Rod Felton and New Modern Idiot Grunt Band on different occasional. I used to be there early to help set up and do the door for Pete and he introduced Rod Felton to me as 'the only star Coventry had produced'. Pete played flute had lent it Rod and the next week we went to the Earlsdon Cottage before the Walsgrave session to retrieve it. Rod was sitting on the lawn behind the pub with his crowd playing and Pete Waterman joined in on flute. Shame it wasn't recorded! The Grunt played alongside Coventry folk rock outfit April (Ron Lawrence, Bill Jackson etc), Roger Williamson's East Light and Rod Felton himself. Altogether a themed folk progressive night!" 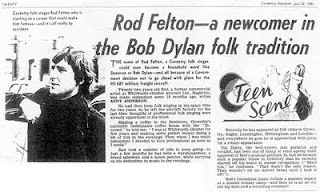 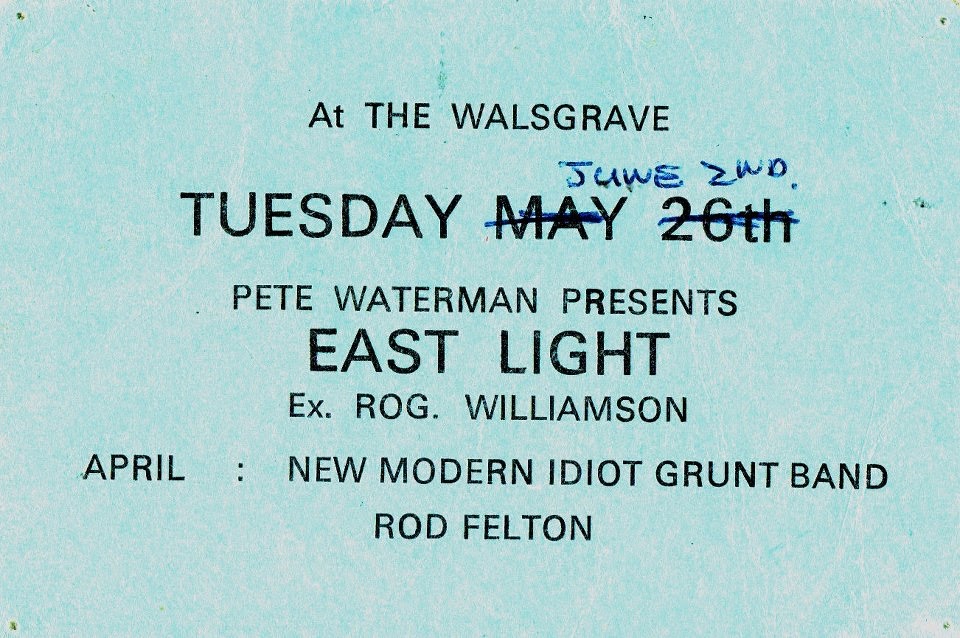 
Posted by Coventry Music Scene Archive at 8:16 AM