Colin Armstrong - one of the Top Coventry singer songwriters and artists to come out of Coventry.
I met Colin in 1971 when he was playing in Music Box with Rob Armstrong (the renowned Coventry guitar maker and musician) who made the album Songs of Sunshine in 1971. They were playing the Plough Club (London Road) with Dando Shaft and i tried to book them for the Umbrella club only I think they split up not long after.

HOBO MAGAZINE AND WORKSHOP -
Colin featured a few times in HOBO magazine and the local press (which can be seen below). I had a lot of respect for Colin as a singer songwriter, artist and a friend. Colin was well involved with the Hobo Workshop at the Holyhead Youth Centre in 1974 / 5 where we encouraged new bands and artists who were struggling to get first gigs. Colin often performed for us in between the bands and took an active and advisory role on the Workshop's management committee and was indeed a great advocate for it. It's thanks to Colin that Hobo was mentioned on the original Broadgate Gnome Music Directory site initiated by Ian Green and Paul Leather - and through that mentioned in the book Godiva Rocks - Pete Chambers - a comprehensive guide to Coventry music new and old. (Thanks for that Colin - if you read this).

FORGING HIS CAREER AS A SINGER SONGWRITER AND ARTIST
Colin was making great leaps forward towards developing his career in songwriting and art during the Hobo period as the press cuttings show. He won the Midlands are heat of the National folk / rock contest and was entered into the semi-finals. The top prize was a recording contract with EMI. He was judged the best soloist act from all over the West Midlands. He was the only one from the area chosen to go through to the national semi finals. He did 10 minutes with three of his own compositions -  Country Boy, Country Bound; Blues for Glenda; Heaven and Hell.

He described his music at the time as Funky Folk. Like many, he'd made the trek to London to try and get a contract and sell some songs but without success. Colin was an engineer by trade and also an Abstract Artist. His work had been displayed at the Minster Gallery, the Kongoni Cafe and Methodist Central Hall and Warwick University, Herbert Art Gallery and Belgrade Theatre. Colin did a certain amount of recording, radio and televison work. (See the press cutting was from Covrntry Evening Telegraph c 1978 / 9.)

From Hobo issue 1 June 1973) -
"Congrats to Colin Armstrong in reaching the Semi-finals in the Melody Maker National Rock/Folk contest and also to Just Jake, Willow, Naked Light, Just Before Dawn, Bumble and all the other Covnetry bands / artists that took part. More on them if poss - later." 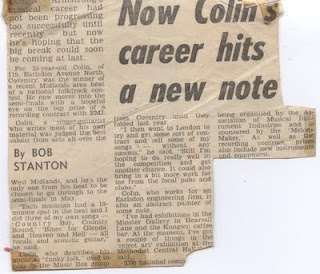 While involved with the Hobo Workshop - Colin formed a little band with  Bob Rhodes (the detached youth worker involved with the Hobo Workshop) and Myself - Trev Teasdel. The band didn't get beyond a few rehearsals at the Canal Basin and Holyhead Youth Centre but the material involved covered some of Colin's and my songs and a few standards favoured by Bob Rhodes such as Summertime; a Peter Paul and Mary song and Jerry Lee Lewis song and the current I Hear you Knockin'. I don't think we got as far as naming the band but finding time for rehearsals was difficult with Bob's work committments and I was full time at Henley College on a Social Studies Course and the band split before it had got off the ground but the sessions were fun and I learnt a lot from Colin's approach to writing and playing.

We were in admiration of Colin's Gibson Acoustic which we figured had set him back a bit but Colin explained that he saw it in a second hand shop in Cov going very cheaply (because the shop keeper didn't know the value of Gibson guitars!), so Colin used his rent money to buy it. He obviously made great use of it through his performances and writing.

More recently Colin ran his own shop - Armstrong Books and Collectables in Albany Rd.
Posted by Coventry Music Scene Archive at 10:39 AM